Here’s the audio from my interview with Chat and Spin Radio. My interview starts at 10:15. 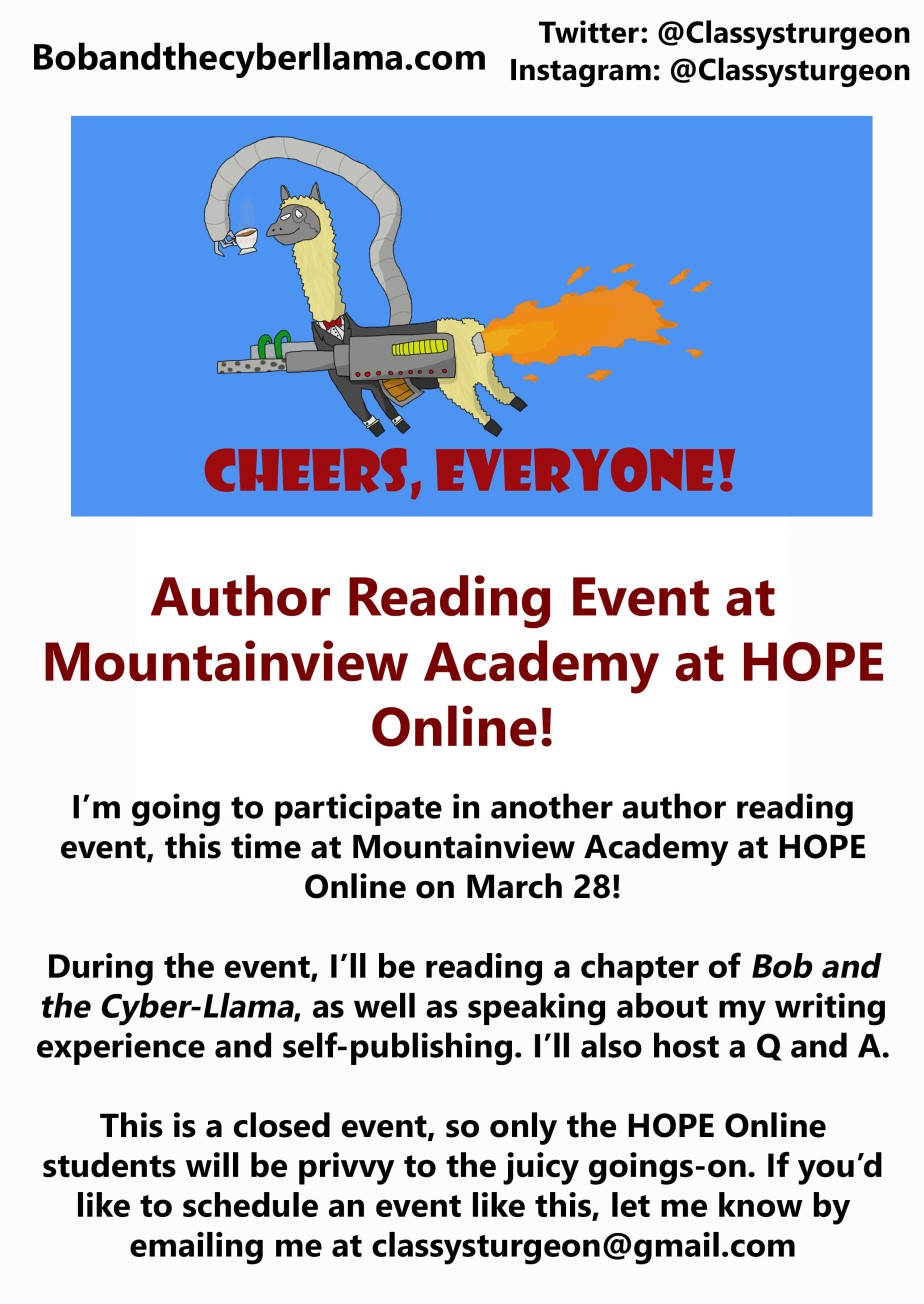 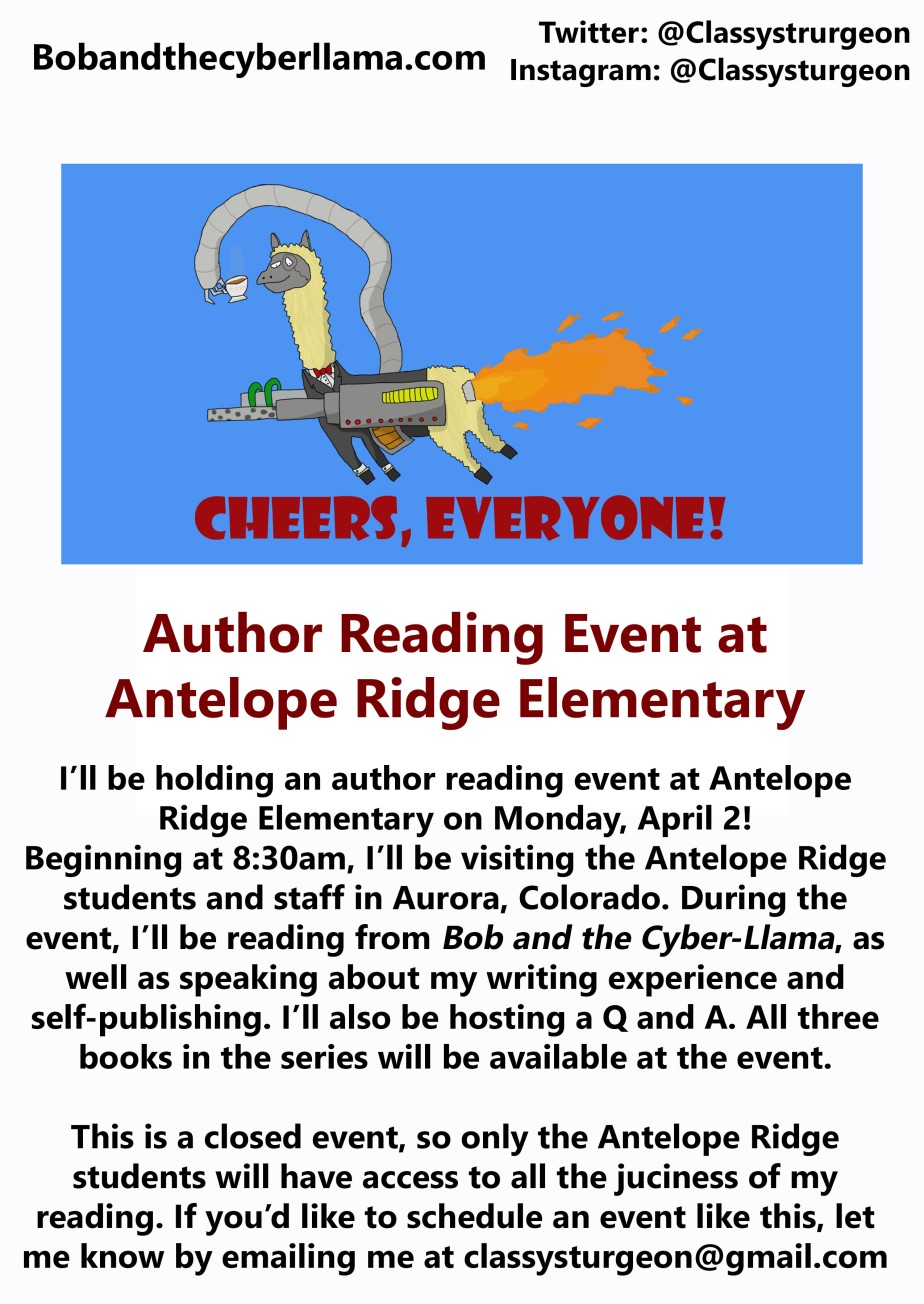 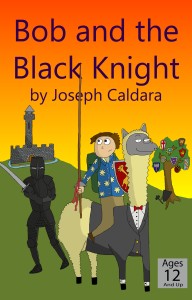 Sound the horns of plenty and smack your chihuahua’s buttocks with glee! The wait is over; You can now buy Bob and the Black Knight in print from Amazon and Lulu or digitally via Kindle!

In their third escapade, Bob Halibut and his cyber-llama butler, Jeeves, hit the adventuring trail once again, this time in search of the mythical sword Excalibur. As they comb through the remnants of King Arthur’s legacy, they find a world of armored knights, killer cockatrices, an evil sorceress, sweet snacks, salty snacks,  sweet-and-salty snacks, and break-dancing.

If you’re ready to go medieval with Bob and his cyborg quadruped, pick up Bob and the Black Knight today! 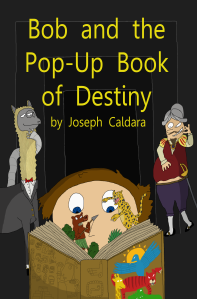 Kill the fattened calf! Sound the horns of celebration! Run into the streets, put on your finest top hat, coat your naked body in dijon mustard, and sing hallelujah!

Bob and the Pop-Up Book of Destiny is finally available on Amazon Createspace, Kindle, and Lulu!

In this, their second adventure, Bob Halibut and his cybernetic llama butler, Jeeves, travel to Mexico, where they use Hamadi’s map to explore an ancient Aztec ruin. Deep in the dark, stanky temple, they discover the Pop-Up Book of Destiny, an artifact of unimaginable power.

And after they encounter a vengeful conquistador, Bob and Jeeves battle long-dead forces to save Mexico City from destruction and despotic rule.

But the story is only part of the fun this time: each chapter now includes a picture of one of the characters or scenarios described in the book. 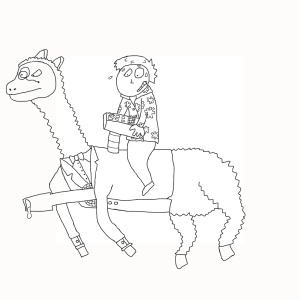 I’ve also added illustrations to the original Bob and the Cyber-Llama. You’ll have fortnights of fun gazing in awe at my glorious artistry, your personal hygiene slowly deteriorating as you fail to tear yourself away from its breathtaking beauty.

Like Bob and the Cyber-Llama, Bob and the Pop-Up Book of Destiny is a great read for kids, adults, and fifth-dimensional koalas alike. Buy it now or regret it for the rest of your days. 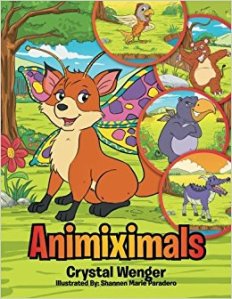 Before you read this post, I want you to think back. Way back, to your childhood, a time somewhere in-between the day you discovered hair underneath your armpits and that time you left the womb. A time when, if you were like me, you always looked forward to that special time of night when you would sit down with your mom or dad and hear them read you a story.

Most of the books I remember featured simple stories that were easy for kids to digest. I recall books like Corduroy, The Very Hungry Caterpillar, and its oft-criticized sequel, The Diabetic, Morbidly-Obese Caterpillar.

But do you remember those…other books? The ones that didn’t have much of a story and instead just featured a long list of strange, whimsical creatures? I remember spending hours just staring at the pictures in books like There’s a Wocket in my Pocket and One Fish, Two Fish, Red Fish, Blue Fish and feeling a different set of emotions hit me each time I flipped to a new page like a thousand base-jumping hamsters landing gently on my skull.

Animiximals is such a book of goofy creatures, and I’d recommend it to anyone looking to not just entertain, but to inspire their children. This isn’t just an imaginative book; there are plenty of those. It’s a book that sparks a child’s imagination.

Animiximals, written by Crystal Wenger, features a plethora of bizarre-looking creatures, each one a combination of two or more animals. You’ll meet creatures like a Dopher (a dog/gopher) a batsquito (a bat/mosquito), a butterfox (a bufferfly/fox), and a fishkin (a fish/chicken), which I eat my fill of whenever I go to Arby’s.

Every one of the images in this book stamps itself onto your mind. When I read through Animiximals, I immediately thought about what I would have done with this book as a kid. And that would have been to grab some tracing paper and recreate my favorite creatures so I could hang them on my wall.

The art has a lot of subtle touches, too. For example, each miximal is pictured next to a tree, bush, or other plant, which gives the reader a sense of its size (the zoose, for example, could easily destroy Tokyo in an afternoon.)

But the book isn’t just pictures. Each creature is described in sing-song-y rhyme. The rhyming language will grab and hold onto a kid’s attention like a starving chihuahua onto a chicken wing. But the best part about these descriptions is that they ignite childrens’ imaginations and cause them to look beyond the illustrations. They’ll picture the animal’s personality, voice, and mannerisms in their heads.

For example, the squig “doesn’t sound at all like a squirrel or a pig. It does, however, moo like a cow, bleat like a goat and makes these awful disgusting sounds from its throat.” Any kid who hears that sentence will immediately picture a squirrel-pig creature walking around a pasture, mooing.

My favorite part of Animiximals was actually its length. This book doesn’t just show you a handful of silly creatures and call it a day. There are twenty-eight of these things lurking within the book’s pages. It’s a nice, long read for a child and keeps the nutty critters keep coming.

If you have a kid who’s outgrown Go, Dog, Go, but is a little young for Bob and the Cyber-Llama or War and Peace, check out Animiximals. This book is an imagination-builder, a book that’ll keep your kid in that fun, make-believe mindset long after you’re finished reading.

And now that I’m done with this review, I need to stop by Hobby Lobby. I’ve got to pick up some tracing paper…

All works on this site are licensed under a Creative Commons Attribution-NonCommercial-ShareAlike 3.0 Unported License. Details can be found at the following URL: http://creativecommons.org/licenses/by-nc-sa/3.0/deed.en_US