In a post about two weeks ago, I described the complex, spiritual, mind-blowing, existential process of designing the cover for Bob and the Pop-Up Book of Destiny. I explained how I first take about an hour out of my busy schedule of writing “Andy Griffith Show” fanfiction to draw the initial cover in pencil: 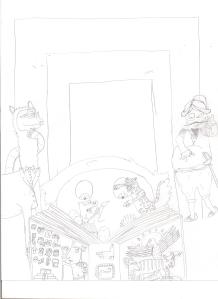 After this, I scan the picture into the computer and trace the pencil lines like so: 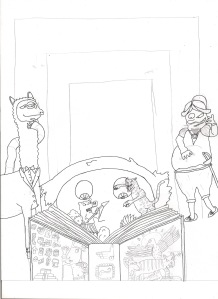 Then comes the color. Over the past year or so, I’ve developed a pretty efficient process for coloring pictures. I use the magic wand on the black outline layer to select enclosed areas. I then use the modify tool to expand the selected area and fill it with color using the fill tool. I do have to zoom in and do a little additional coloring, as the magic wand tool isn’t perfect, but it’s a lot more efficient than using the brush to color an entire area. 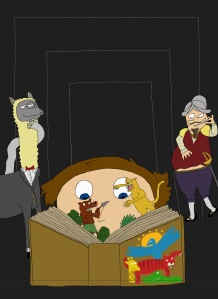 At this point, I don’t need to use the original image anymore; the whole thing is a recreation of the original pencil drawing.

After this, I do the shading. Shading is like the crunchy exterior of a Klondike bar. It doesn’t seem flashy at first, but makes the whole experience much, much more enjoyable. Shading mimics the light source hitting the characters, which makes the image much more realistic (as realistic as a cartoon llama can be, anyway.)

I take a darker version of an object’s color and use it to color the side of the object opposite the light source. For this cover, the characters are in a dark temple with light streaming from the pop-up book. I think the shading turned out pretty well: 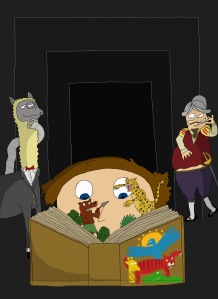 Then, I turn down the opacity of the fur layer to make it see-through. The final result looks something like this: 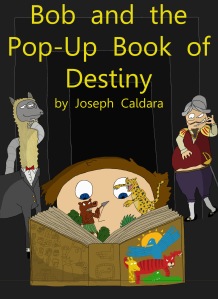 And voila! A cover that would make Michelangelo pee his pants with envy! Now that the front cover is done, I just need to work on the rear cover and the spine (which take much less time) and upload the book to Amazon. And then I just wait for my Pulitzer.